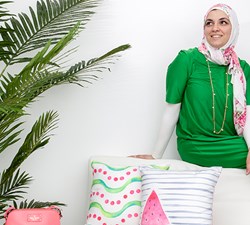 Yasmine El-Mehairy, the founder of “SuperMama”, one of the best family platforms in the Middle East, amazes us with another start-up that will help struggling households even further. “Coushies” is a local, designer-cushion online store that supplies soft furnishing that suit every modern home (https://www.coushies.com/).

However, “Coushies” is far more than that; Yasmine embarked on this entrepreneurial adventure by involving less privileged female crafters, allowing them to shine through their work, support themselves financially and foster the passing on of their talents.

A key element in Yasmine’s enterprise was the cooperation with NGOs such as ‘Tawasol for Development’, which helps children in the Establ Antar area learn a craft so that their parents keep them on at school, and ‘Rommana’, an NGO that trains and employs women in crafts, such as embroidery, to provide them with a sustainable income.

Yasmine believes that you do not have wait to be a mighty corporation to start working on CSR. Social responsibility is something that should be built into your business from the beginning. This belief encouraged her to start on this whole new activity, which required goodwill and some nerve as well.

Yasmine was awarded an MBI Al Jaber Scholarship and graduated from the University of Westminster with an MA in Interactive Media in 2004. She is now Chief Executive Officer and Co-Founder of “SuperMama” (www.supermama.me). In order to set this business venture up, Yasmine drew on her IT skills previously learned and perfected whilst working as a Usability Engineer and Business Analyst with the Egyptian company, ITWORX, which she quit in 2008. In her spare time, Yasmine has taken up photography as a hobby and also writes short stories which she publishes in an e-group for Egyptians interested in art and culture.