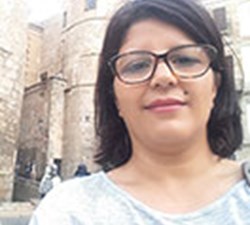 Lobna is an Assistant Professor of Literature at the University of Manouba, Tunisia. She completed her postgraduate degree in Comparative Literature in 2001 and has since studied for a PhD. Lobna is married, has a daughter and is just embarking on a new research project concerning trauma studies and postcolonial women’s literature.

After completing his MSc in Development Studies 2001 at SOAS, Ahmed moved to Berlin in 2001 where, until 2005, he worked as a Research Associate at the Middle East unit of the German Institute for International and Security Affairs.  He is currently the Co-executive Director of Transform: Centre for Conflict Engagement and Political Development, a Berlin-based organisation which he co-founded in 2007.